In case you are wondering, a procession of palms did happen today in Jerusalem. Here’s a clipping from one Israeli news service: “Franciscan friars wearing surgical masks and gloves made house calls in Jerusalem on Palm Sunday, delivering olive branches to Christians who are self-isolating as a precaution against the coronavirus.” Even as we are unable to gather together, as worshiping communities, we can still celebrate Palm Sunday and the start of Holy Week. One way, I thought I could help is to make today’s blog posting about the gates of Jerusalem.

Although the walls of the old city of Jerusalem were built in the early 16th century, many of the gates into the city date from a much earlier time. Today there are, in fact, eight gates. The newest is appropriately named, the New Gate and it was built in 1889. There is a gate that is not usable; it is called the Gate of Mercy. (It has been blocked for centuries, and awaits a miraculous opening when the Messiah comes and the dead are resurrected.) Next is the Damascus Gate, built in the 16th century, the Zion Gate, Jaffa Gate, and the Dung Gate (you can only imagine how this gate got its name. It is believed that Herod’s Gate is located on the site of the King’s palace and that this is where Jesus would have been brought to see Herod.

Although it isn’t clearly outlined in scripture which gate Jesus used to enter into Jerusalem, it is commonly believed that the Lion’s Gate is the spot. The site is near the Mount of Olives and adjacent to the Via Dolorosa (the Way of Sorrow), the traditional path Jesus took from his imprisonment to his crucifixion. The route passes by the Pools of Bethesda and ends at the Church of the Holy Sepulchre (the traditional site of Jesus’ tomb).

The gate is often referred to as St. Stephen’s Gate, due to it being believed to be the site of the stoning of the first Christian martyr, Stephen. The four lions carved near the gate aren’t lions at all. They are panthers. They were placed there by Sultan Suleiman the Magnificent to celebrate the Ottoman defeat of the Mamluks in 1517, which began of the building of the city walls.

I’ll talk later this week about the Via Dolorosa and other sites in Jerusalem. As we celebrate Palm Sunday, I thought you might like to know a bit more about the gate Jesus entered through to start the events we now call Holy Week. I’ve included a few photos from gates around Jerusalem and labeled them for you. 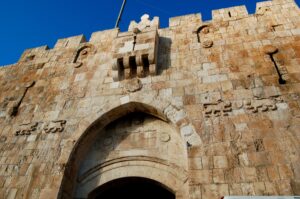