When I think of visiting one of the great Cathedral cities of England, the usual suspects always come to mind: Canterbury, York Minster, Ely, Wells, Salisbury… (the list could go on and on).There’s one Cathedral most people wouldn’t think to put on their list, though it is one of the most beautiful and emotionally stirring houses of worship in all of the United Kingdom. Coventry Cathedral is a site I could visit a hundred times and feel as if I wanted to go back for more.

Coventry is located in the West Midlands of England. It’s only about an hour north of Oxford and about two hours from London. As cities go, it isn’t the prettiest of sites (sorry Coventry). It has been a center of industry for nearly two hundred years, which has left the city a bit “industrial looking.” As for my experience with the city, there isn’t a lot to see and do, with one major exception.

Coventry Cathedral is the common name for St. Michael’s Cathedral. The current building is actually the third Cathedral to be built in Coventry. The first was a monastic building that became the seat of the Bishop of Coventry in 1095. (As an interesting side-note, the Benedictine monastery was endowed by Lady Godiva Later on, in 1043 – but that’s a completely different story)! The first purpose-built Cathedral was started in the 14th century and stood until November 14, 1940. This is where the story really begins. (Sorry, this is a little longer than my usual blog posts.)

Here’s an article written by Chas Early of BT:

On November 14, 1940, the city of Coventry was devastated by a German bombing raid that lasted for over 10 hours and left over two-thirds of its buildings destroyed or damaged. Among the ravaged buildings was the Cathedral of St Michael, which had stood in the city since the late 14th century. Only its tower, spire, outer wall and the tomb of its first bishop remained.

A heavily industrialised area, Coventry was deemed a legitimate target for its munitions factories, though for the first time in the war, the Luftwaffe’s bombing seemed largely indiscriminate and designed to cause as much destruction to life and infrastructure as possible. The raid began at 7.20pm when marker flares were dropped, closely followed by wave upon wave of bombers dropping high explosives and incendiaries. The Cathedral first caught fire at around 8pm, but was hit many more times during the course of the raid.

Though Cathedral staff and firemen were on hand to try to save the building, they were quickly overwhelmed, and by 11pm their water supply for dousing the flames had run dry. The all-clear was finally sounded at 6.15am the following morning. In the wake of the bombing, Cathedral Provost the Very Reverend Dick Howard said: “The cathedral will rise again… and it will be as great a pride to future generations as it has been to generations of the past.”

The new Cathedral was set adjacent to the bombed out framework of the old. The foundation stone was laid in 1956 and the building was consecrated in 1962. The service included the premier of Benjamin Britton’s “War Requieum,” which was composed for the occasion. Many of the building materials and items in the Cathedral were donated by countries around the world. When you visit you will see the markers all around the building denoting these donations.

As you approach the Cathedral, you enter it through the bombed-out remains of the old building. It is an interesting juxtaposition to walk though such a testament to human cruelty and war to enter such a holy place. In the old section, you’ll see stained glass window frames with shards of the original glass fused together and blackened. You see the original high altar and a cross of charred wooden beams from the original building. You’ll also see a statue entitled “Reunion,” by the artist Josefina de Vasconcellos, placed as a symbol of reconciliation. There are other copies of the statue in Hiroshima Peace Park in Japan, the Stormont Estate in Northern Ireland, and the Chapel of Reconciliation in Berlin.

As you enter the new structure, you will be transported into a modern expression of what a Cathedral could be. The building, although stark, is stunning, inspiring, and a beautiful example of the world coming together to help people in need of a place to worship and heal. The colors, light, and textures that surround you will be a feast for the senses.

The next time you travel to England, make sure to add Coventry Cathedral to your list of “must see” visits. And, especially in our current times, remember how the world came together to rebuild something that was lost, but never forgotten. 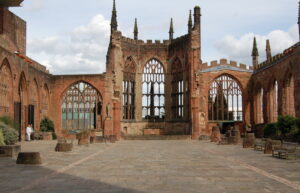