Today’s pilgrimage takes us to the Temple Mount, in Jerusalem, and is more of a story of the last time I visited there. While I will share some history, what I really want to do, as we approach Good Friday, is share with you what it felt like to be standing in a site that Jesus would have known, seen, and visited. So, come along with me to Jerusalem.

A couple of years ago, I had the opportunity to visit Israel with a group of my Faith Journeys colleagues. We were engaging one of our most popular pilgrimage itineraries and were headed into Jerusalem for the first time. Like most groups, we began atop Mt. Scopus, which overlooks the Mount of Olives. This is, in my opinion, the absolute best place to get an overview of the city.

So, on a very cold and windy day, we had our first look at Jerusalem and the iconic Dome of the Rock, which is located right in the middle of the Temple Mount. I’ve often found it a bit surreal to see something, in person, that I’ve seen so many times in pictures, paintings, and films. The Dome of the Rock was no exception.

A day or so later, we had our first chance to visit the Western Wall and the Temple Mount. It was a very cold February morning when we cleared the security checkpoint and first saw the wall up close. As our guide explained to us, this is the closest point that Jewish Israelis can come to the original temple complex. It’s a pretty nondescript stone block wall that is absolutely teaming with people. The weather seemed not to have an effect on the number of people gathered.

As we drew near the wall, we were urged to follow all of the Hebraic rules to approach the site. First, there is one side for men and another for women. Men should wear a head covering or yarmulka (which is provided for people who would like to approach the wall in the traditional manner). Women are required to cover their heads, as well. There is a fountain with basins for ritual washing (our guide talked us through what to do and how to do it). And, finally, I approached, (having learned that a respectful practice is to not turn one’s back to the wall).

I’ll admit, it felt a little odd, at first, following these dogmatic rules that were so different from my faith tradition. As I moved near to the wall, I felt I was becoming one with a tradition and lineage of faithful people who have come to the Temple Mount for thousands of years to pray.

You may be wondering if I followed the tradition of placing a piece of paper with a prayer or petition in one of the cracks of the wall. Yes. I did, just like the potentially billions of other people who have visited the walls before me. Experts argue over how the tradition began, though it has been documented since the early 18th century. It is estimated that pilgrims and travelers place over one million prayers in the walls every year; if walls could talk, indeed! You may be wondering what happens when the cracks are full; I was too. I researched and found that twice a year the slips of paper are removed by a Rabbi and his assistants and the prayers are taken to the Mount of Olives to be buried.

We visited the Southern Steps, where Jesus preached and taught his followers. We also walked along the base of the walls, through paths lined with huge stone blocks which were scattered in unorganized piles around the walking paths. These stones are original building materials from the temple, destroyed and dismantled by the Roman Empire in the year 70 AD.

As I walked along surrounded by the discarded rubble, I kept thinking of two bible verses, “The stone which the builders refused has become the head stone of the corner.” (Ps 118:22) and “Jesus answered and said to them, “Destroy this temple, and in three days I will raise it up.” (John 2:19). 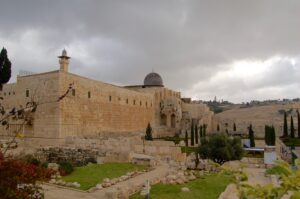