Today, we visit the site of a well-known story from the Gospel of John. As we read in John’s Gospel:

“After this there was a feast of the Jews, and Jesus went up to Jerusalem. Now there is in Jerusalem by the Sheep Gate a pool, which is called in Hebrew, Bethesda, having five porches. In these lay a great multitude of sick people, blind, lame, paralyzed, waiting for the moving of the water. For an angel went down at a certain time into the pool and stirred up the water; then whoever stepped in first, after the stirring of the water, was made well of whatever disease he had. Now a certain man was there who had an infirmity thirty-eight years. When Jesus saw him lying there, and knew that he already had been in that condition a long time, He said to him, “Do you want to be made well?”

The sick man answered Him, “Sir, I have no man to put me into the pool when the water is stirred up; but while I am coming, another steps down before me.” Jesus said to him, “Rise, take up your bed and walk.” And immediately the man was made well, took up his bed, and walked. And that day was the Sabbath. The Jews therefore said to him who was cured, “It is the Sabbath; it is not lawful for you to carry your bed.”

He answered them, “He who made me well said to me, ‘Take up your bed and walk.’ ” Then they asked him, “Who is the Man who said to you, ‘Take up your bed and walk’?” But the one who was healed did not know who it was, for Jesus had withdrawn, a multitude being in that place. Afterward Jesus found him in the temple, and said to him, “See, you have been made well. Sin no more, lest a worse thing come upon you.” The man departed and told the Jews that it was Jesus who had made him well.” (John 5:1-15 NKJV)

Today the ruins can be seen in the Muslim Quarter, just inside the Lion’s Gate. It is a popular stop for those preparing to walk the Via Dolorosa and a peaceful site just outside the busyness of the market streets. Near the pools is a church that was built by the Crusaders. It was begun

in the early 12th century and was constructed over the site believed to be the childhood home of Mary, the mother of Jesus. This church is named St. Anne’s Church, in honor of Mary’s mother.

St. Anne’s is a favorite stop for musicians, as it has some of the best acoustics of any building in Israel. It is especially well-suited for Gregorian Chant (which makes sense, as it was built in a time that these chants were an integral part of worship services). If you get a chance to visit St. Anne’s, you are invited to sing a hymn, chant a psalm, or simply raise your voices in songs to God.

Jerusalem holds so many treasures for pilgrims who have been visiting since the time that the first Christians came to the Holy Land. When you visit, consider those who have walked these same pilgrim’s steps before you and feel the connection we have today to centuries of prayer and worship. 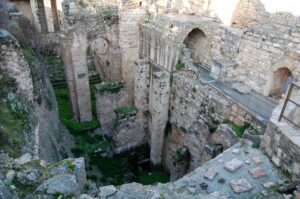