Yesterday we journeyed Edinburgh, and today we travel to a nearby and very important site, Stirling. Located nearly equal distance from Edinburgh and Glasgow, Stirling is a more obscure sight not everyone has heard of, and surely not visited. If you do get a chance to travel there, you may want to go back, again and again.

Our first stop is Stirling Castle. Built atop a large hill, the castle has been of strategic importance from the time of the Roman Empire’s presence in Britain. There may have been a fortress here as early as the 8th century, and parts of the current castle date from the 12th century. Although most of the present buildings date from between 1490 and 1600, the site is considered to be the most important castle in Scotland, both historically and architecturally.

Stirlings geographic location makes it very unique. It is located at the dividing point between the Scottish Highlands and Lowlands. This position, has led to a famous saying about the castle, “He who holds Stirling, holds Scotland.” One of the most fascinating features of the castle is the views from the Southern and Northern ramparts (exterior defensive boundary walls). Looking out from the Southern rampart, you can see small rolling hills which become flatlands as the eye travels, and from the Northern rampart you can see the distant mountains of the Highlands.

The history of the Castle is probably more known to us than we realize. We’ve read about it in books or seen all about it in movies and television shows. The movie “Braveheart” tells the story of William Wallace and the first Scottish fight for independence. One of the most famous battle of that war was the Battle of Stirling Bridge, which was fought only a short distance from the castle. Today, when you enter the castle, you’ll see a statue of Robert the Bruce. Just a few miles from the castle you’ll see the relatively new William Wallace Monument (a tall tower built on the site where Wallace watched the English armies gathering before the Battle of Stirling Bridge).

Another famous chapter in Stirling’s history is associated with Mary, Queen of Scots and her son James. It was at Stirling, that 13 month old James VI was named King of Scotland, after his mother, Mary, had been forced to abdicate the throne. The Church of the Holy Rude, the medieval parish church, stands at the bottom of a hill near to the castle was the site of his coronation.

Founded in 1129, the Church of the Holy Rude (yes, that’s the right spelling) is the second oldest building in the city; it was rebuilt in the 15th-century after a fire in 1405. Holy Rude is the only surviving church in the United Kingdom, apart from Westminster Abbey, to have held a coronation service. At the coronation of James VI, the Scottish reformer John Knox was not only present, but was the preacher! James VI would later become James I of England which began the union of the crowns of the United Kingdom. He would also commission the King James Bible, which is still in use today.

Stirling was also a major site during the Jacobite Rebellion. In 1745, Charles Edward Stuart (Bonnie Prince Charlie) led his army of Highlanders past Stirling, en route to Edinburgh and into England. Following the Jacobites’ retreat, they returned to Stirling in 1746 to capture the castle. They did not succeed, as battle ended quickly with the rebel’s artillery being destroyed by the bombardiers and the castle’s cannons.

The history and significance of Stirling make it well worth a visit. It is, I think, one of the most beautiful castles in the United Kingdom. So, when you are in Glasgow or Edinburgh, be sure to take the short trip to Stirling for a visit. I’m sure it will become a favorite to you, as well. 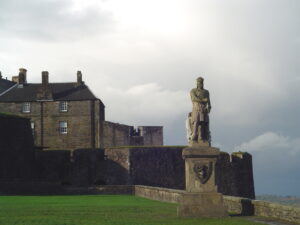