Today, we travel a little over 30 miles from Edinburgh, to the town of St. Andrews. While the town is most well-known for something I’ll share later, St Andrew’s is a very significant religious site, as is the Cathedral that bears the name. St. Andrew’s Cathedral was not only the most important pilgrimage sites in medieval Scotland, but one of the most important in the world! Today, its impressive ruins are as much a draw as the famous golf course.

People have inhabited the area between the rivers Tay and Edin, along the Eastern Scottish coastline, for over ten thousand years. The area is lush with vegetation, has access to fresh water rivers, plentiful food sources from the North Sea, and a temperate climate. It isn’t surprising that a monastery was established on the site during the 8th century.

It is believed that a legendary 4th century monk from Patras, Greece, by the name of Regulus (sometimes called St. Rule), fled to Scotland with the reliquary containing the bones of Saint Andrew (including the saint’s arm, kneecap, three fingers, and a tooth). Regulus settled in the area between the rivers. The story gets a bit disjointed after that.

He was either shipwrecked or told by an angel to stop near the spot where the town is located today. The legend also states that he was welcomed by a Pictish King, by the name of Óengus I, who helped to build a monastery. The problem with the story is that the King and the monastery are historically tied to the 8th century – four hundred years after Regulus was supposed to arrive in the area. Nevertheless, the town has been know as St. Andrews ever since.

Today, the town contains some wonderful sites and ruins that are well worth a visit.

First is Holy Trinity (also known as the Holy Trinity Parish Church). It is the most historic church in St Andrews. The original building was built around 1144, but later moved to a new site in 1410. It was once a Cathedral, but after a fiery sermon my the reformer John Knox in 1559, it was stripped of its Cathedral status. Today, it belongs to the Church of Scotland (Presbyterian) and is an active site of worship in St. Andrews.

Next, we come to the ruins of St Andrews Cathedral. Its huge footprint made it, at one time, the largest building in Scotland. It contains St Rule’s Church, on the south-east side, which dates from around 1120, and preceded the building of the large cathedral. You can still see the tall square tower of the church, which was built to hold the relics of St Andrew.

Construction on the remainder of cathedral was started in 1160 but not completed until 1318. (If you read the post about Stirling, you may note the presence of a famous leader in Scottish history being present at the Cathedral’s consecration – Robert the Bruce!) – As a side note, you may wonder what happened to the stones from which the Cathedral was originally built. Some of the older buildings in St. Andrew’s have been built from them, and they have also been used as grave markers that fill the interior of the footprint of the ruins.

Our next stop is St Andrews Castle, also now in ruin. It is located on the top of a cliff just North of town. The first castle was built around 1200 as the residence, prison, and fortress of the bishops of the diocese. It was rebuilt and added to over time. The castle sustained heavy damage during the Wars of Scottish Independence (which was discussed in the Stirling post). The majority of what can be seen today dates from the mid 16th century.

Whether one is a fan or not, one really must see the Old Course of St. Andrews. While not a religious site, it is most certainly a pilgrimage site for golfers and golf enthusiasts from around the world. It is considered to be the birthplace of the game. There have been documented occurrences of “the playing of golf” on the site since 1552. The Open Championship has been held there 29 time. While there, you can visit the British Golf Museum, which houses the largest collection of golf memorabilia in Europe and outlines the history of the sport from its very beginnings.

There are many other things to see and do in St. Andrews (including the university, which is the third oldest in the English speaking world – behind Oxford and Cambridge) and walking the Fife Pilgrim Way (the route established in the 11thcentury by pilgrim traveling to the holy site), to name a few. You will find St. Andrews an idyllic and beautiful day-trip from Edinburgh and a journey into the history of Scotland’s religious past. 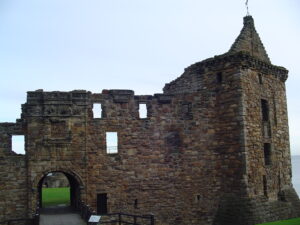