In April of 2010 I traveled to Scotland with a close colleague,  as a post-resurrection gift to myself (two years ordained, and serving as a rector, I thought to myself, “Monday after Easter Sunday has to be the BEST time for an international flight!” Note to self: give it a week for recovery!)

We were excited to travel throughout the countryside on every mode of transportation available to us: buses through the crowded city streets of Edinburgh and Glasgow, rental cars to the rolling hills of the speyside of St. Andrew’s and the verdant highlands of Aberdeen, and finally the marvelous railway system to Oban where we would embark to the Isle of Mull and finally to the Isle of Iona.

Iona is a very small island just off the southwestern coast of the Isle of Mull. It is one island among the Inner Hebrides, an island chain of over 75 islands, of which 30 or so are inhabited. Iona is a very special place; the birthplace of Christianity in Scotland, stilled in time, peaceful, hallowed, and set apart from the rest of the world in ways that I could feel in my spirit even as we boarded the ferry Fionnphort, at the southwestern tip of Mull.

My only experience with being on a ferry, prior to being in Scotland, was traveling throughout the routes around coastal British Columbia. I have always loved water and water travel. I was immediately overtaken by how my whole being responded to the what I was seeing, smelling, and feeling, and that sense that God was asking me to participate in a profoundly different manner, as we boarded and headed on our way. I had a bit of a “Somewhere in Time” moment; I felt as if we were traveling back in time to a place I have always, and yet never knew I loved.

I’ve heard the hour’s ferry ride described as breathtaking. I recall that all I was doing was breathing… breathing in the thick sweet spirit of what is described as the “thin place;” where the veil between the church militant and the church triumphant is transparent and where the saints of this world can almost dance with the saints who have gone before. I remember how luminous and ever-changing the waters were—one moment a deep sapphire, then changing to cobalts, indigos, and finally a vivid teal.

While there is much to do on the island, and one can spend days, our trip was to be a three hour day trip, because we came for one reason, and one reason only. We came to see the abbey. “St. Columba and 12 companions came to the Iona from Ireland in 563[AD]. The monastery they founded was one of the most important and influential in the British Isles. It sent missionaries to northern Britain to convert people to Christianity.”[1]

“Columba’s fame has brought pilgrims to Iona since the 7th century. Visitors still follow a route similar to the Sràid nam Marbh (‘Street of the Dead’) taken by pilgrims of old. But it now ends at a 13th-century abbey, which stands on the site of Columba’s church.”[2]

As I was currently serving St. John’s (the evangelist) church, I was fascinated by the history of what I only knew as the “Celtic” cross. There were four crosses erected just west of the shrine of St. Columba, where now there is a replica cross. The remnants of some are in the museum with a placard the reads, “St. John’s Cross (Carved between 750[AD] and 800[AD]… The carvers were too ambitious and made the arms of the cross too long, causing it to collapse soon after it was put up. They then strengthened it by adding a supporting circle around the head. The design was widely copied afterwards throughout Scotland and Ireland…” Hmmmm… while the circle intended as “function,” I’ve been gifted many beloved renderings of the “form” in my lifetime.

My time spent at Iona Abbey was such that when anyone asks me, “Is a trip to Iona ‘all that?’ It seems out of the way.” I just want to say, “Shut your mouth! No Chrisitan flies all the way to Scotland and skips Iona,” (and then roll my eyes). Iona is “all that.” Iona was the rejuvenation I sought after just two year in ordained ministry. I often hear, in my heart, the waters surrounding the isle, and the stones of the abbey itself, calling me to return. 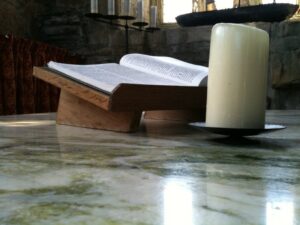