If any of you know me, you knew it wouldn’t be long before I started writing about Scotland. Of all the places I’ve lived, Edinburgh is, by far, my favorite. Sir Walter Scott once called the city “yon Empress of the North.” And, what is an Empress without a crown. Today, we’ll visit St. Giles’ Cathedral, the crown jewel of Edinburgh.

St. Giles’ Cathedral, or the High Kirk of Edinburgh, was likely founded in the 12th century. It was dedicated to St. Giles, the patron saint of beggars, blacksmiths, cancer patients, hermits, rams, spur makers, and Edinburgh (among other things). It was elevated to collegiate status by Pope Paul II in 1467. Until the Scottish Reformation, the church was the only parish church in Edinburgh!

In 1559 the church became embroiled in the fervor of the Reformation and was the site of many meetings and confrontations between the supporters of the Catholic Mary, Queen of Scots and one of the reformations most outspoken preachers, John Knox. After the Reformation, St Giles’ was internally partitioned to serve multiple congregations as well as secular purposes, including as a prison, and as meeting places for the Court of Session and the Parliament of Scotland. In the 19th century, St Giles’ was restored and the internal partitions were removed.

As if that wasn’t enough denominational history, in 1637, following the union of the crowns of Scotland and England, King Charles I attempted to draw the Scottish (Presbyterian) church into line with the Church of England (Anglican). Things came to a boil when the king attempted to impose the new English Book of Common Prayer on St Giles’. During a service a local woman picked up her stool and threw it at the preacher, starting a riot, and church services had to be suspended for a week (for fear of a more violent public uprising). After the War of the Three Kingdoms (also known as the British Civil War) the building was restored as a Presbyterian place of worship.

In a span of only one hundred years, St. Giles’ went from being Catholic, to Presbyterian, to Anglican, and back to Presbyterian! The interior was added to, reconstructed, demolished, partitioned and restored. That is quite a history.

Earlier, I called St. Giles’ the “crown jewel of Edinburgh.” One of the reasons is its distinctive crown steeple (one of Edinburgh’s best-known landmarks). There are only a few examples of this steeple type in the world. I’ve included a photo so you can see what it looks like. Another fine example is at the Cathedral in Newcastle-upon-Tyne, where I served as a Man of the Choir during my time in England.

There are many sites within the Cathedral that are worth a visit. It is the home of the ornately carved Thistle Chapel (home of the Knights of the Thistle – Scotlands highest chivalric order). You will want to see the beautiful stained glass windows and the massive pipe organ (which was installed in 1992). One of the strangest “must see” sites at the Cathedral is in the parking lot. Under parking spot #23, in the car park on the right side of the Cathedral, is the grave of John Knox. It wasn’t always a parking lot. He was buried in an old church cemetery, 20 feet from the building. There is a plaque on the ground that is visible, if no one is parked there when you visit.

So, that’s the story of St. Giles’ Cathedral – The High Kirk of Edinburgh. The next time you are in Edinburgh and would like to visit it, just head for the “Old Town” and look for it’s famous crown. I’m sure you’ll agree it is a stunning and fascinating building and an interesting glimpse into the history of Edinburgh and Scotland. 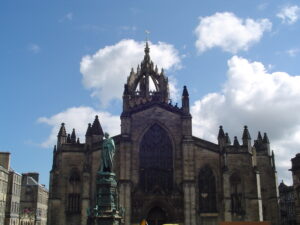