Located just 8 miles South of Edinburgh is a site that draws thousands of tourists each year. Most of the visitors to the site view it as a literary “must see” and not a religious pilgrimage site. So today, we’ll visit Rosslyn Chapel and learn about its history and significance. I’ll also share why anyone interested in church history and lore might add this to his or her list of sites to visit in Scotland.

Originally named the Collegiate Chapel of St Matthew, Rosslyn Chapel was founded on a small hill above Roslin Glen as a Catholic collegiate church in the mid-15th century, by William Sinclair, 1st Earl of Caithness. It is the third place of worship at Roslin built by the Sinclair family. The first was located in Roslin Castle and the second on the site of the local cemetery. (You can still see the crumbling buttresses of that building if you visit the site.)

After the Scottish Reformation, in 1560, Catholic worship in the chapel ended. But, the Sinclair family continued to observe the traditions of Roman Catholicism until the early 18th century. In 1861, the chapel was re-opened as a worshipping community of the Scottish Episcopal Church (in the Anglican Communion).

In the late 1980’s a theory was established that the chapel’s history was tied to Freemasonry, the Knights Templar and the Holy Grail. Since that time, it has been prominently featured in Dan Brown’s bestselling novel The Da Vinci Code (2003) and the 2006 film adaptation of the book. The original plans for Rosslyn have never been found or recorded, so there remains speculation as to the chapel’s intended purpose in the context of its current layout. The architecture is considered to be among the finest in Scotland.

Construction of the chapel began on 20 September 1456, although it has often been recorded as 1446. The confusion over the building date comes from the chapel’s receiving its founding charter to build a collegiate chapel in 1446 from Rome. Sinclair did not start to build the chapel until he had built houses for his craftsmen.

One of the most fascinating features of the building is the stone carving that cover almost every facet of its interior. There is hardly any surface of the walls and ceiling that are not intricately and beautifully carved. These carvings include 213 patterned cubes (or boxes) protruding from the many pillars and arches. To this day, no one has figured out their meaning or purpose!

Additionally, there are more than 110 carvings of “Green Men” in and around the chapel. (Green Men are carvings of human faces with greenery growing out of their mouths or around them. Some of the more intriguing carvings depict crops like wheat, strawberries and lilies. There are, however, two plant carvings that are confusing to historians. They are maize (corn) and aloe. What makes these unique is that at the time of their sculpting, neither plant would have been known to the builders – which suggests the theory that someone in the Sinclair family may have landed in America prior to the common history we all know.

One of the single most viewed items of the chapel is the “Apprentice Pillar.” As the legend goes:

A pillar near the high altar was to be based on the design of one in a foreign country. The master mason, of the chapel’s construction, didn’t believe that his apprentice could complete the task of carving the column without seeing the original which formed the inspiration for the design. The master mason travelled to see the original himself, but upon his return was enraged to find that the upstart apprentice had completed the column by himself. In a fit of jealous anger, the master mason took his mallet and struck the apprentice on the head, killing him. The legend concludes that as punishment for his crime, the master mason’s face was carved into the opposite corner to forever gaze upon his apprentice’s pillar.

There is no evidence that the story is true. But, it does make for an interesting story of why the two pillars are so stylistically different.

Rosslyn Chapel is a stunning reminder of the craft of stone carving and a beautiful example of a 16th century church; it is well worth a visit, friends. Perhaps the legends are true and the site is tied to the Knights Templar and the resting place of the hidden Holy Grail. Maybe medieval Scots traveled to the Americas before Columbus. And, possibly, a master stone mason killed his apprentice in a fit of jealousy. I’ll leave that up to you to decide. They only thing left to do is visit Rosslyn and see it for yourself. 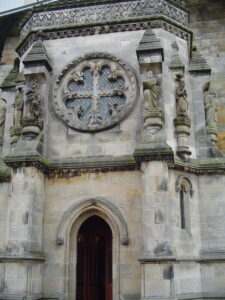