Today, we enjoy post by a guest blogger, the Rev. Canon Johnnie Ross, Diocesan Dean for Small Church & Pastoral Development, The Episcopal Diocese of Rochester, NY, and Rector of St. Andrew’s, Caledonia and Grace, Scottsville. Johnnie and his wife recently led a pilgrimage to Israel that included a three-day extension to Petra.

Imagine with me please, a little boy in the 1960’s, isolated in the hills of eastern Kentucky and his sixth grade teacher introduces him and his class to the “Explorers Club.”

It was a small cardboard box, one that had obviously arrived in the mail, that when opened before the entire class seemed like a treasure chest. It contained a map, a sheet of facts, a souvenir, which in this case was a toy, a postcard, and a black, rubbery, 45rpm size, floppy record, that she took carefully from its sleeve and placed on a small turntable that sat on her desk. “This is Commander Whitehall speaking to you from…” in this case, “Vorca del Grappa, high in the Italian Alps.” His voice was loud and captivating. The music that played in the background was of a kind that made you want to jump up and dance. At some point, the Commander introduced him and his classmates to words they had neither read nor had heard spoken, and he invited them to say the words back and to learn their meaning. It was, to say the least, a cultural classroom experience.

At the end of the recording the Commander invited those gathered to join his circle of friends and become members of “The Explorers Club.” The membership fee was $5 a month, for which you would receive a treasure box very similar to that their teacher had just shown them. Only five dollars, which to this poor, Appalachian boy, and many of his classmates, seemed like a fortune, but this little boy was the first to ask if he could take the information home.

Running from the bus, bounding onto the front porch, and bursting through the door of his grandmother’s house, a place where he had come to live, moving there from Detroit after the death of his father, he yelled with excitement,“MaMaw!” He played the record for her on the big stereo that sat in the living room next to a black and white console television. In his excitement he showed his grandmother the map, the toy, and read aloud from the fact sheet, before handing her the postcard. “What do you think, Mom?” He asked. “Can I join?” The response, though disappointing, was not totally unexpected. Five dollars a month was just too expensive, but that didn’t keep him from listening to that floppy little record another dozen times before going to bed.

That little boy was me, and before running off to school the next morning, my grandmother stopped me at the front door and handed me a $5 bill. “Join the Explorers Club,” she said. She promised to purchase as many months thereafter as she could afford. I waited and waited for the box to come in the mail. Then one day, the box arrived. On the first little floppy record that was mine, Commander Whitehall’s booming voice welcomed me to “the Nabatean Kingdom and the ancient city of Petra; one of the Seven Wonders of the World.”

The postcard that accompanied the explorer’s treasurer box showed a dark crack in the valley and peeping through the huge crack, was a beautiful stone building, hand carved into a sandstone rockface by ancient Arab builders, a city that had given birth and life to an entire Kingdom of like structures. The way the sun shone on the building made it look like gold. That photo I remember to be much like the photo that accompanies this entry. On the flip side of the card, almost as if the cracks were flaps opened to reveal the entire building, was “The Treasury!”

We couldn’t afford very many more $5 tours of the world beyond eastern Kentucky guided by Commander Whitehall, but I never forgot Petra, nor my desire to one day see that Seven Wonder. On Wednesday, February 12, 2020, my wife and I spent the night in the Petra Guest House. The next morning, we walked boldly into the valley and took this photo of a place I had been introduced to as a child, and we did it as tour hosts with Faith Journeys.

Early in the morning of February 13, 2020, after being greeted by two guards in authentic native dressed, there we stood on the same ground as the ancient, polytheistic, Nabataeans – an Episcopal priest and his wife – staring at a two-story mausoleum built in the 1st Century BCE. A place where legend has it, was the building used as the royal treasury for the Egyptian Pharaoh Ramses II, the ruler at the time of Moses. There I stood, captivated by the same Wonder of the World I had dreamed of seeing as an eleven year old boy.

There, in front of The Treasury, I mounted and rode an Arabian camel, the single humped dromedary commonly used by the residents of that area for centuries.

There, with The Treasury as a backdrop, I knelt in front of a  young Bedouin boy as he carefully tied a keffiyeh on my head like a turban, much like the one he wore himself.

There I stood and listened to a Jordanian Bedouin grandfather sitting cross-legged on a woven rug, his back against the canyon wall, playing a native, single stringed instrument, with a bow, and beside him was his grandson, selling strings of prayer beads.

Petra, one of the Seven Wonders of the World captured in the dreams of a 6th grader and 51 years later released those dreams as a reality. WOW! This is one place you must see. 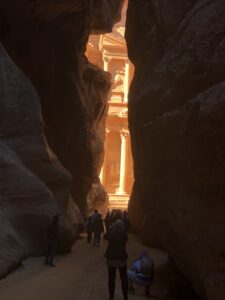