Today I offer you something different. Instead of focusing on one place, I want to tell you about three different sites, in two different countries, that are all about a 30 minute drive from each other. Join me as we take a virtual pilgrimage to Trier, Echternach, and the Luxembourg American Cemetery and Memorial.

Many years ago, I had the opportunity to visit Luxembourg. It isn’t a place that would be on the radar of many people. It isn’t a well known tourism or pilgrimage location due to one of the issue, its size. The entire country is less than 1000 square miles in area, making it one of the smallest countries in Europe, and making it difficult to find many amenities one might find with larger tourist attractions. But, because of its size and location, it makes a perfect hub for day trip exploration. Luxembourg is just a one hour drive from Germany, France, Belgium, or the Netherlands; the entire region is full of interesting religious and historical sites.

Our first stop is Trier, Germany. Trier is an ancient settlement, founded by the Celts before the time of Christ, and was invaded by the Roman Empire in the first century. There are several Roman sites preserved in the city that should not be missed. The most impressive is the Porta Nigra (or Black Gate). It is the largest Roman gate North of the Alps and has been on this site since before the start of the 2nd century. You can also see the ruins of a Roman bath, a bridge, and memorial column dating from the year 250.

Three of the most interesting sites in the city are the Basilica, Cathedral, and Church of our Lady.

All three buildings are located within just a few minutes walking distance on each other. They are all worth a visit!

Our next stop is the Abbey of Echternach. This Benedictine monastery is located in Eastern Luxembourg. It was founded in the 7th century by St Willibrord (the patronal saint of Luxembourg). In the 19th century one central tower started to crumble and was considered at risk of collapse. In 1862 a reconstruction/preservation project was started for the complete reconstruction of the church. In 1939, to recognize the importance of pilgrimage to the site, Pope Pius XII named the church a minor basilica. The building was further damaged by bombs during World War II, but has since been restored.

On a personal note, when I visited, I was offered an extended tour of the crypt. This is the burial site of St. Willibrord. I spent a good amount of time reading the plaques and taking photos. The entire time, I kept thinking “The name Willibrord seems very familiar to me. How do I know that saint’s name?” After we left and I was processing my photos, I took the time to look him up. The day of his death and the day he is remembered by the church (his saint’s day) is my birthday! How many people can say they’ve stood before the saint that is commemorated on the day of their birth!

I have one more site that I want to mention in this tour of the area around Luxembourg. It isn’t a religious site, per se, but it is a place that I found to be powerfully moving. That site is the Luxembourg American Cemetery and Memorial.

Located just outside of Luxembourg City, this military memorial of the Second World War contains the graves and remains of 5,073 American soldiers. The site covers 50 acres and was dedicated in 1960.  The white marble grave markers (crosses and stars of David) mark the last resting place of soldiers killed in the area. One notable gravesite is that of Gen. George S. Patton. His marker (identical to the other soldiers) is placed facing the troops he commanded. The site is hauntingly peaceful and a great addition to any visit to this area.

I hope you’ve enjoyed this tour of Luxembourg and the surrounding area. We would love for you to share your pilgrimage experiences, and consider traveling with us to religious sites around the world. You can send your experiences and photos to info@myfaithjourneys.com. 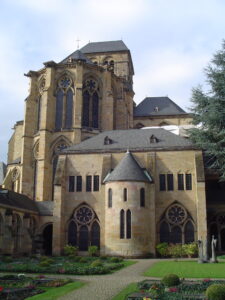