Salisbury is an ancient site of worship, in many respects. Follow us as we travel through history to visit Stonehenge, Old Sarum, and the Salisbury Cathedral.

The area around Salisbury has been inhabited for millennia. Even with all of the scientific data that continues to be collected and the ongoing research performed at the site, most of what we know is still speculation. To quote one source:

“Stonehenge was a place of burial from its beginning to its zenith in the mid third millennium B.C. The cremation burial dating to Stonehenge’s sarsen stones phase is likely just one of many from this later period of the monument’s use and demonstrates that it was still very much a domain of the dead. Schmid, Randolph E. (29 May 2008). “Study: Stonehenge was a burial site for centuries”. Associated Press.

What we do know is that the site has drawn fascinated visitors for centuries. The iconic stone circle has been featured in print since the 17th century. When you are in the area, Stonehenge is a “must see” for any traveler. With the recent redesign of the visitor’s center and parking facilities, it is easier than ever to access the site. Even those with limited mobility can easily enjoy a visit.

A nearby site that is often overlooked as an itinerary option is Old Sarum. It is one of the most interesting and historically significant sites in the South of England, combining a royal castle and cathedral within an Iron Age fortification. One of the most important worship movements that came from Old Sarum was the use of the Sarum Rite. It has been mostly forgotten as a style of worship, but is still used on occasion in both Roman Catholic and Episcopal settings. I wouldn’t be unable to put into words how beautiful I find it. Here is a short video of a Sarum Rite Mass from Merton College, Oxford, recorded on the Feast of Candlemas in 1997. https://youtu.be/21pnAoiGnjs

Our last stop in the area is in the city of Salisbury. The Cathedral at Old Sarum was relocated to Salisbury in the 11th with construction, on this stunning church, beginning in 1220. It would not be completed until one hundred years later! The Cathedrals 440 ft. tower and spire was a great feat of engineering, for the time, and is the tallest in the United Kingdom, to this day.

Some other features of the building include the oldest working clock in the world. It dates from 1386 and still keeps accurate time. Another striking item is the baptismal font. It was installed in 2008 and was first used at a service celebrating the Cathedrals 750th anniversary. The 10 foot wide basin might seem out of place in a structure with so much history, but I think it is a beautiful reminder that the church is both living, and traditional– of the past, the present, and the future.

One last “must see” when visiting Salisbury Cathedral is the Chapter House Museum. It is a unique octagonal shaped room with a slender central pillar. Along with several other interesting religious and political artifacts, it houses the best-preserved of the four surviving original copies of Magna Carta (the charter of 1215 between King John and the people, securing their rights – and one of the most significant documents in the history of world).

When you find yourself in the West of England, be sure to make the area around Salisbury part of your itinerary. You won’t be disappointed! And, you may learn more than you expected about how people have worshiped throughout time. 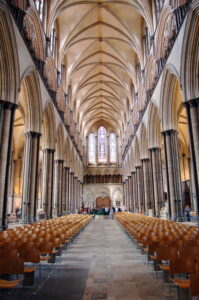