Tucked away in the Calvados region of Normandy is the small town of Lisieux. This little site in the Northwest of France could be easily overlook by visitors if it had not been for one person, St. Thérèse, sometimes called “The Little Flower of Jesus”.

I shared in a previous blog about traveling with a youth orchestra to France and the time we spent visiting Paris. That trip also included some more out of the way places where the group met, practiced, and performed, with youth orchestras from all around France. Following a special ceremony at the Normandy American Cemetery and Memorial, we made the short sixty mile trek to Lisieux to visit the Basilica of St. Thérèse.

The Shrine at the Basilica has become the second most visited pilgrimage site in France (second only to Lourdes). To understand its popularity, we need to know more about the saint it commimoriates. I visited several websites to find a good story of her life, and in the end, settled on a paraphrase from multiple sites.

Thérèse Martin, the youngest of nine children, was born in Alencon, France, in 1873. Four of her siblings died at a young age; and the remaining five (all girls) eventually all became religious sisters.

After the death of her mother, while Thérèse was only 4, she would spend most of her childhood struggling with illness, both physically and emotionally. Eventually, she was healed of her maladies, at the age of 11, by what has become known as “Our Lady of the Smile.” And at the age of 13, she experienced a profound conversion.

Thérèse felt a call to become a nun, but she was too young to enter the convent. She was told she would have to wait until she was 16 years old. However, she and her father appealed to the Bishop, and not getting the desired response they wanted, made a plea directly and personally to the Pope (when they were on a pilgrimage to Rome).

Her persistence paid off and Thérèse was allowed to enter the Lisieux Carmel at the age of 15. She wrestled with her vocation and place in the Church. Finally, she came to realize that her “vocation is love.” The love of God was the energy source for the Church and of the human heart and longing.

As she came to these beliefs, Thérèse developed a simple spirituality, based on her childlike trust of and confidence in God. The spirituality of her “little way” was not about extraordinary things – but rather about doing the simple things of life well and with extraordinary love. She believed and taught that “everything is grace” – God’s face and presence could be experienced in every person and situation, if we just attend with love and expectancy.

The National Shrine and Museum of St. Thérèse writes, “Her poems and plays reflect her struggle to give all to God. Her love became surrender, as she slowly died of tuberculosis. During this time, her superior asked her to write down her reflections, which became her autobiography, ‘Story of a Soul.’ ”

“She died at the age of 24, believing that her life was really just beginning for God, promising to spend her heaven doing good on earth. Her promised ‘shower of roses’ began and has become a torrent in the Church ever since.”

“She was canonized by the Church in 1925, when she would have been only 52 years old. In October, 1997, Pope John Paul II declared her a Doctor of the Church, because of the impact and challenge her spirituality has had on the lives of so many of God’s children.”

Today, with a visit to the Basilica of Thérèse one can spend a day or a few hours reflecting on the simplicity of St. Thérèse’s message. Even today, she can still teach us humility, gentleness, and to not be judgmental. God’s face can be seen everywhere and in all faces, if we only look for it. 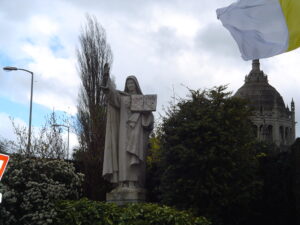