The miracle of Jesus turning water into wine is recorded in only one of the four Gospels, yet John’s story is often pointed to as a defining moment in Jesus’ public ministry and a sign of his power. Today, we visit Cana, in Galilee, to learn about the site of that first miracle.

Although argued by scholars, the site of the biblical Cana may have been a number of places. We know that it was close enough to Galilee for Jesus and his mother to travel there to attend a wedding. The likely candidate, and place we will visit today, is Cana of Galilee or Kafr Kanna, located a little over 4 miles from Nazareth. This site has been recognized by the church since the 8th century as being the biblical site.

I’ve often reflected on this story and the relationship between Jesus and Mary. I’ve filled in the holes of the story to include Jesus being asked to take his mother to a wedding a few towns over. He probably didn’t even know the couple. He was just going to please his mother. While he’s there, it came to be that they had run out of wine (a big no-no in the culture of his time) and Mary shared this with Jesus. He asks, “so what am I supposed to do about it? It’s not time for me to do show who I really am.” She insists and he obliges and just like that, Jesus is revealed to the world!

The story has always amused me a bit. You may have an experience of being in public with parents who ask us to do something that will bring attention to us and pride to them. It can be hard is to say no. Jesus knew his time was coming. The time had come for his public ministry to begin and for him to walk the path that had been provided for him since the beginning of time.

Today, a visit to Cana is not complete without a visit to The Wedding Church. It was built in 1881. Archeological digs have found evidence of a Jewish Synagogue at the site, dating from the 4th century. The site also houses a display of ancient water jugs (that legend has, are the ones Jesus used to change the water into wine). If you go during the daytime, you are likely to see either weddings or renewal of vows ceremonies going on in the church. This has become a very popular activity for Roman Catholics who are visiting the site.

At the gates of the church, you will see the symbols of grapes. I think the imagery is two-fold. The grapes signify the wine transformed from water and the other the blood that was shed for us by Jesus, just as he described at the first Eucharist. One miracle, performed in love for his mother, and one miracle performed for us all. 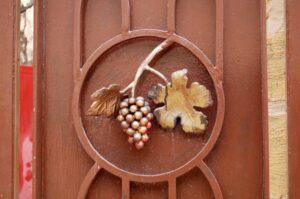