For any group (or individual) visiting England, and flying into London’s Heathrow Airport, I would strongly suggest making the short drive to Windsor. Located just under 10 minutes out from Heathrow, Windsor is a great historical treasure and a perfect place to start adjusting to the time difference. With its quaint city center, proximity to Eaton, and famous castle, I think you’ll want to make it a part of your arrival day routine, as well.

The original castle was built in the 11th century and it is still in use today as a Royal Residence. Windsor is Queen Elizabeth’s favorite weekend getaway and you can always tell if she is present, as the Royal Standard will be flying from the central tower of the castle.

From the coach park, you must walk past the train station, passing by the rolling countryside into the city center. As you near the station, you can see the campus of Eaton College (the most famous boarding school in England). Upon your approach, you can’t miss the castle fortification, as it dominates the cityscape. One building you might miss is the Windsor Guildhall. It was designed by Christopher Wren. As the story goes, Wren wanted the center of the market floor to be open, but the city fathers thought it would need pillars to hold the weight of the building. So, Wren gave them pillars! When you look closely, however, you may notice the pillars don’t go all the way to the ceiling. There is a gap between them!

At the castle one sees a range of architectural styles, spanning over eight hundred years. In 1992, the structure suffered a massive fire, but much of the castle’s furnishings were saved by the help of some local volunteers and first responders. According to one account, “staff and tradesmen helped the castle’s fire brigade and volunteer salvage corps move furniture and works of art from the endangered apartments, to include a 150-foot long table and a 120-foot long carpet, 300 clocks, a collection of miniatures, thousands of valuable books and historic manuscripts, and old Master drawings from the Royal Library.” Today, the buildings are fully restored and a top attraction for people visiting the area.

One building of note at the castle, that I must mention, is St. George’s Chapel. Although a hallowed site for centuries, it was recently re-thrust into the limelight as the venue for the 2018 wedding of the now Duke and Duchess of Sussex, Harry and Meghan (Markle) Mountbatten-Windsor. And of course, we know that Presiding Bishop of the Episcopal Church, Michael Curry, made history when he preached at their wedding.

The chapel is a stunning example of Perpendicular Gothic design (of an emphasis on vertical lines) and a marvelous place to start any pilgrimage to the united Kingdom. It is also the gravesite of King Henry VIII (who is buried between the choir stalls near the altar), and nine other graves of past monarchs, to include King George VI and Queen Elizabeth (the parents of Queen Elizabeth II).

There are many other things to see within the castle and town. You could easily spend days exploring the area. But, if you only have a few hours and want to see a great castle and historic town, Windsor is the place to go. And, with it being 10 minutes from Heathrow, why not make this the beginning of your journey back in time? 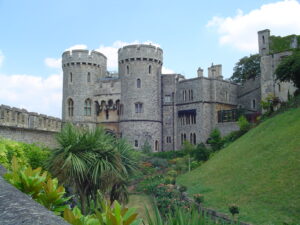