Have you ever seen something that has mentally transported you to another place and time? There are so many famous sites around the world that I’ve seen in photos, movies and films that when I saw them in person, I said to myself, “Oh, that looks exactly like I thought it would.” But, there are places that strike me with awe and exceed any expectation of what I thought they would look like. One of those places was when I visited Beit She’an in Israel. I’d like to share my experience with you.

I suppose that only a few places I’ve ever visited have surprised me. The first time I walked into Canterbury Cathedral was certainly one. Another has to be the Grand Canyon (in my adopted home state of Arizona). Seeing the scope and scale of those sites sort of put me in my place. The world is full of wonderful things that God has created and ordained and we, as pilgrims, need to experience them.

A few years ago, I had the opportunity to visit Israel for the first time. The entire experience, I think, for any Christian, can be a bit surreal. We walk in the steps of Jesus, following ancient paths that a multitude of God’s people have trod. But, as I have said before, sometimes its the places I don’t expect that move me and set my feet more firmly on the pilgrim’s road and Best She’an was certainly one of those places.

While not named in the New Testament, Beit She’an does have an Old Testament lineage. There is a story of a great battle, around 1100 BC, between the Hebrew and Philistine armies. The battle is important to biblical history because King Saul and his three sons all died in the fight. The author of the book of 1st Samuel writes that the king and his son’s bodies were hung from the walls of the city. This event established David as King.

Although Beit She’an is not directly mentioned in the New Testament, it is a city Jesus and his followers would have known. It was part of the Decapolis (or ten great cities located on the Eastern edge of the Roman Empire). These cities were centers of Greek and Roman culture, with sizable populations). They were also wild and full of “riotous living.” In fact, many biblical scholars believe that it is the “distant country” Jesus refers to in the parable of the prodigal son.

Today, the site is one of the most spectacular Roman sites in Israel. Entering the gated complex is like walking back into another time. Your eyes behold a site filled with stone slab streets, lines with columns. The city has been extensively excavated and reconstructed to look as it likely did a thousand years ago. While there, you can stroll through the city, at your own pace, stopping to visit the bathhouse, the Roman Amphitheater and a hippodrome.

While not on every pilgrimage itinerary, Beit She’an is definitely worth a stop. If you’re in Nazareth, its only a short (30 minute) drive to Best She’an. Like me, you might feel transported back to the time of Jesus and gain a better understanding of where he walked and what he saw during his ministry. 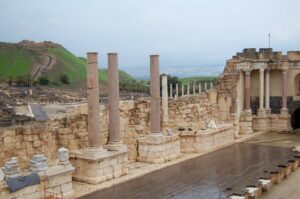