About an hour southwest of Oxford is a site called Avebury. You’ve probably never heard of it, and rightfully so. The Village of Avebury is very rural and has a population of about 500 inhabitants (with twice that many sheep)! It is a stunning site to visit and explore.

The reason people go to Avebury is to see the Neolithic henge. It contains three stone circles spread across an area of about nine square miles. Unlike its famous cousin Stonehenge (just 17 miles to the South), Avebury is completely free of barriers. You can walk right up to the stones and touch them.

Now, I know that there is no Christian pilgrimage aspect to visiting a site like Avebury, but it is fascinating (to me) to think that these stones may have been standing in this circular pattern as early as 3000 BC. This is about the same time of the laying of the foundation of Solomon’s Temple!

Instead of telling you the history and significance of the site or why you should visit it, I thought I’d post some photos to help inspire you. Most of the time, a picture speaks more than words! I hope you’re inspired and will consider seeking out sites less traveled, like Avebury, on your next pilgrimage. 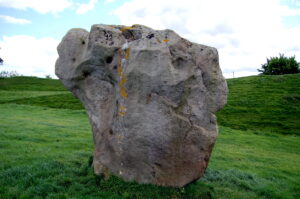