Tucked away in the quiet Somerset region, Southwest of England, is the ancient city of Bath. From it’s Roman baths to Victorian spas, this city has been “on the map” since the 1st century! Join us today as we visit Bath and Bath Abbey.

Let’s begin by clearing up how to properly pronounce the town’s name. We see Bath and we think bath (like the thing we bathe in), which makes sense, due to the Roman history of the site. But, if you want to sound British, you must use an “Ah” sound. So, you could say Bath (rhyming with math) or Bath (rhyming with moth). They choice is yours!

We know the hot springs in the area around Bath have held a special place in the culture of the Britons since around the year 60 A.D.. Following Roman occupation, a bathhouse was constructed on the site. Over the next 300 years, it was built up and developed into the structure we see today.

The Roman baths are a “must see” when visiting the area. Basically forgotten until the 19th century, the baths are a fairly modern take on the actual ancient site. As you enter the facility, you walk through the terrace, which is filled with Victorian statues. The footprint of the current structure is only a fraction of the original size and scope. As you continue on through the tour, you’ll learn about ancient Roman culture, religion, and how and why these baths were so important to them.

As you exit the baths and cross the street, you will be facing Bath Abbey, one of the most impressive buildings ever built in the Perpendicular Gothic style. Its fan-vaulted ceiling and 52 windows (occupying 80 % of the wall space) lend themselves to a structure that feels as light and airy as it does ancient and sacred.

Founded as a convent in the 7th century, it soon became a monastery, and by the 10th century was under Benedictine rule. Earlier buildings, churches, and a Cathedral were all built on the site, with the present structure dating from the 16th century. In the mid 1800’s, the building was remodeled and restored. Many nearby buildings that were actually touching the abbey, or just too close, were removed to allow an unencumbered views of the entire building.

Today, the pedestrianized streets in the Abbey/Baths precinct are full of public art and local shops. I highly recommend The Bath Sweet Shop, as a great place to find locally-made, old-fashioned candy and sweets. (You’ll feel like you’ve walked onto the set of “Willie Wonka and the Chocolate Factory”).

When you find yourself in the Southwest of England, be sure to visit Bath and don’t forget nearby Wells (home of another one of the most beautiful Cathedrals in England). They are located about forty minutes apart and only about an hour West of Salisbury. If the historical and religious sites aren’t enough of draw, did I forget to mention that Bath was the home of Jane Austin? Maybe that’s all the “persuasion” you need! 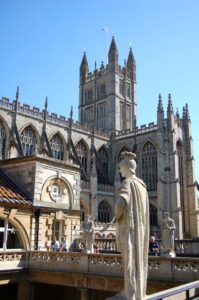