About an hour south of Madrid is the city of Toledo. It was, at one time, the capitol of the Visigoth Kingdom, a conquest of the Moorish armies, a stronghold of the Knights Templar, and home to a solemn procession which dates from the 15th century, and is still celebrated today.

When I was working on the music performance side of the travel industry, a close friend called me late one evening. He said, “my church choir has been selected to sing at the Corpus Christi Festival in Toledo.” My friend wanted to know if I could help set up the tour for them. “Of course,” I said. My first question was: Ohio or Spain? We both shared a good laugh. He confirmed that he was speaking of Spain, and we started discussing details.

Thinking we had a year and a half to prepare, I told him I would get started on my research (at that time I had never traveled to Spain), and would be presenting him with a detailed itinerary in the next few weeks. He said, “Great, but I can’t wait that long.” I was confused. He replied, “No. We’ve been accepted for this year’s festival!” After I recovered from my initial panic, I started putting the details together and ended up traveling with the group as an extra singer. At that time, I could never have imagined that Spain, and Toledo, more specifically, would become one of my favorite European pilgrimage locations.

Toledo is a beautiful city. It is a UNESCO World Heritage Site and was a fortified settlement before the time of Jesus and his Disciples. During Toledo’s long history it has been occupied by indigenous peoples, the Roman Empire, the Visigoths, the Moors, Castile, and Spain. Many buildings date from the 10th and 11th centuries. One of my favorite of her storied history in the association Toledo shares with the Knights Templar.

In relationship to the Templar, Toledo is considered to make the finest steel blades in the world (especially renown for the craftsmanship and manufacture of swords) and these weapons were highly prized by the knights of Europe. And, there still exists a series of tunnels under the city that were built and maintained by the holy order of knights. These passages allowed for living quarters, stables and a quick hidden pathway from one side of the city to another in the midst of a battle.

The central focus of Toledo, today, is the Corpus Chrisi Festival, which takes place in annually in the month of June. Five weeks before the festival, the processional route, which winds through the city, is decorated with awnings, wreaths and lanterns. The day before the feast of Corpus Christi, walls, windows and balconies are adorned with antique pennants and tapestries from the 16th and 17th century, and the ground is strewn with aromatic herbs.

The procession begins at midday as the bells of Toledo begin to peal. First to appear is a group of costumed giants representing the different continents. Then, the procession itself leaves the cathedral, bearing the massive monstrance (an ornate gold structure that holds a host – or consecrated communion wafer). As the movement continues along the ancient processional path, it is accompanied by members of religious guilds, positioned in chronological order, by date of establishment.
The Corpus Christi Festival is a city wide celebration of God’s presence with us. And, I find it to be unlike anything I have ever seen. There are choir concerts and worship services throughout the day, usually ending with a huge feast served in the piazzas throughout the city.

So, when you visit Madrid, don’t forget about her lesser visited sister to the south. Even if you aren’t able to visit during Corpus Christi, Toledo is worthy of your time and, like me, may become one of your favorite European pilgrimage sites, as well! 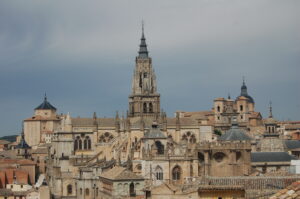