When I lived in the United Kingdom I was blessed with the opportunity to work as first a Choral Scholar and later a Lay Clerk (pronounced “clark”) in two different Cathedrals. I’d like to share a bit about the British cathedral choirs and the buildings where they sing every day!

First, let me explain the structure of the typical cathedral choir in Britain. The choir is led by a team of people. One of the great titles in church musical circles is “Organist and Choir Master.” While there are different variations of this title, it is usually the person in charge of the music program at that church. There may also be an Assistant Director of Music or Assistant Organist and often an Organ Scholar (usually a local university student who is studying the organ).

As for the singers, they are divided into three categories:

When I was living in the UK, and singing at Newcastle Cathedral, I was asked to fill in (or deputy) for a service at York Minster. It isn’t uncommon for one choir to borrow singers from another nearby choir, as needed. I had never sung at York and was very excited to experience leading worship in its massive structure. I was thrilled to experience singing in a building that had been built in the 12th century!

I took the train to York and made my way to the Cathedral. (You really can’t miss the building from most of the city.) I met the Organist, was handed a folder of music, and was shown to a vesting room to find a cassock that might fit. After getting (pardon my British) kitted-up, I was led into the choir stalls, near the high altar of the Cathedral. (Incidentally, the area of a Cathedral near the altar and Bishop’s Seat – Cathedra – is called the “Quire”).

We had a quick rehearsal; some refer to this as a “top and tail.” We didn’t sing through an entire piece, instead checking only tempo changes and cut-offs. It was pretty fast and furious! I don’t remember all of the music we sang, but I do remember the Preces and Responses (the opening responsory sung prayers for the start of the service) were composed by William Smith, a Tudor composer that started his career at Durham Cathedral – located only an hour away from York. As the rehearsal ended and we filed out, worshipers and tourists started flooding into the Cathedral to take a seat for Evensong at York Minster.

As the organist finished the prelude, we chanted a short prayer and processed into our spots in the choir stalls. A priest chanted “Oh Lord. Open thou our lips” (the opening of the preces) and the choir went to respond, “And our mouths shall show forth Thy praise,” but I couldn’t make a sound! My mind had wandered and I was stuck in one powerful and humbling thought. I was standing in the same place, dressed the same way, singing the same words, with the same exact notes, that someone else sang nearly 500 years ago. And all the others, from then to now, had sung the same EVERY NIGHT  in between! The moment was overwhelming and it took me a few seconds to recover my voice.

If you ever have the chance to sing in one of the great Cathedrals of England, I hope you are able to feel the history, spirituality, and connection to all of those who have worshiped there before you. When I have told this story to others, I often use this analogy: “In the history of worship at York Minster, I will always be one small thread in the intricate and beautiful tapestry that it has woven.” This is why we travel to historical churches. This is why we seek to pray and worship in hallowed sites around the world. It is to connect and feel the residue of prayer and spirituality that has been left by other Christians over hundreds and sometimes thousands of years. 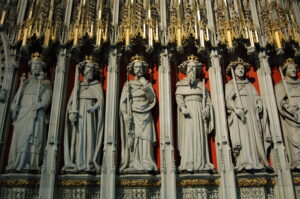