Off the cost of Ireland, as the Bay of Galway opens to the mighty Atlantic Ocean, is a series of three islands with a history spanning nearly 4,000 years. Today, I thought we might visit one of the more remote sites to which I’ve ever traveled. Join me as I lead you through a tour of Inis Oírr and the Aran Islands.

Getting to the Aran (pronounced like the name “Aaron”) Islands can be as much of an adventure as the time one spends on the islands. It’s often the journey that teaches us the most. From Galway, your travels begin with a 45 minute bus ride to Rossaveel (or if you’re coming from the South, you will start in Doolin). From either it is a short 30-45 minute ferry ride into the Atlantic Ocean to the first island.

While none of the islands are very large, (the total area of all three combined being just over 18 square miles), Inis Oírr has an area of just 3.1 square miles, which makes it a great spot for exploring, as you can truly see everything in just a few hours. Hiking or biking are the preferred means of transportation, as there are less than 100 motorized vehicles on the island. In fact, cars have only been allowed on the island in the last 20 years of so.

The island is inhabited and has a population of around 250 full-time residents. The predominate language on Isis Oírr, and the other two islands is Gaelic. Most, if not all of the residents, speak fluent English, as well.

Everywhere you look there are short walls made of stone. These walls separate small plots of land, which are covered with crops or hold livestock. These “cells” have been a part of the landscape on the island for thousands of years! The island is basically a large slab of limestone, and is unable to support farming or grazing livestock, without this ingenious idea. The ancienty settlers built small plots, walled in by small stone fences, filled them with sand and seaweed and made arable soil! Once crops were growing, they introduces farm animals that could help them survive and thrive in such a remote location.

The idea of making something out of what some may view as nothing has always fascinated me. People have lived in the Aran Islands since before 3500BC. They developed a system for growing food, building houses, and traveling between the islands nearly one thousand years before the Egyptians built their first pyramid!

There are several religious sites to visit on the island, including: Teampall Chaomhain Caomhan– the church built to honor Caomhain Caomhan, the patron saint of Inis Oirr (and believed to be the brother of St. Kevin of Glendalough), Cill Ghobnait – a small 9th Century church, and Tobar Einne – the ruined holy well of St.Enda(the patron saint of the Aran Islands). The well is said to have healing powers and has never run dry. There is a legend that if one looks into the well and sees an eel, one will be healed. (When I was there, I didn’t see one!)

There are two other things I want to mention about the area. The first is the Aran sweater. These sweaters are know throughout the world for their beauty, warmth, and durability. They are pricey, but well worth the investment. If you do have a chance to buy one, you will be able to choose between one that is machine sewn, or one sewn by hand. If you choose the one that’s hand-woven, make sure it has a tag with the weaver’s name. Some sweaters have over 100,000 individual stitches. It’s great to have a connection to the person that did all that work. (I do own one, that I purchased on the Island, but don’t get a chance to wear it very often, now that I live in the warmth of Arizona!)

If you’ve traveled the Southern route (from Doolin), you will get a special treat on the way back to the Irish mainland. As you approach the coastline, you will get an amazing look at the famous Cliffs of Moher. The view from the sea is one of the most awe inspiring sites I’ve ever seen! Spanning over 5 miles long and standing 700 ft high (at almost a sheer vertical drop), these cliffs have been a draw to tourists for centuries. It’s one of those sites you’ve probably seen in pictures and movies, but not known what they were called. (If you’ve ever seen the movie “The Princess Bride” you might remember the “Cliffs of Insanity.” They are based on the Cliffs of Moher and some of the filming took place on location.)

I hope you’ve enjoyed todays visit to a “less traveled” site. When you travel for business, pleasure, or pilgrimage, be sure to explore these out of the way places. They may just speak to your spirit more than you expect! 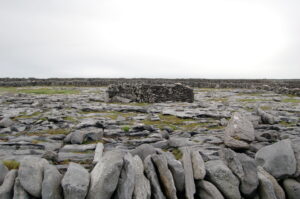