Most people who visit England seem to focus on London. They might want to see one of the ancient University towns of Oxford or Cambridge, but they don’t often stray too far from the capitol. Today, we’ll explore an area only 80 miles from London (and only 14 miles from Cambridge) that is full of history and legend, the Isle of Ely.

First, if you have ever visited Ely or even seen it on a map, you may be asking why I just called it an Isle. Ely is at least 30 miles from the North Sea. Before the 17th century the area was completely surrounded by fens (wetlands), making it a true island. With a series of canals and ditches, the area was drained; it remains susceptible to flooding, even today. These early watery conditions are thought to have contributed to the the name we use today. It was the island where people caught Eels.

Ely, and the surrounding area, have long been associated with the spread of Christianity in Britain. The town is first mentioned in print by the Venerable Bede (which I shared in the blog post about Holy Island) in 731 (AD). In his writing, he mentions an abbey (for both monks and nuns) that had been founded on the islands’ hilltop site in the year 673. It was founded by an Anglo Saxon princess, named Ethelreda.

The abbey was destroyed by Viking raiders in 870. A new structure was built and dedicated to Ethelreda in 970, by Bishop Ethelwold, of Winchester. From that point forward the community thrived. When the Domesday Book was compiled in 1086, the Abbey at Ely was recorded as the “second richest monastery in England”.

Construction of the Cathedral we see today was begun in 1083 and took nearly 300 years to complete. However, one of Ely’s most beautiful and intriguing features was not part of that original design. In 1322, as the building was nearing completion, the central tower collapsed. The solution was to tear out much of the remaining structure supporting the central tower and replace it with an octagonal opening. The plan successful, and today the Ely Cathedral is a “one of a kind” building, boasting an eight-sided central tower instead of a circular dome.

Construction on the Lady Chapel at Ely Cathedral, at 100 feet long, and 46 feet wide, was completed in 1321; it is decorated in true Gothic nature. In 2000 a life-size statue of the Virgin Mary was installed above the lady chapel altar. Whether you love it or not, it is another symbol that the church belongs, not only to the past, but also to the present.

One of the most stunning features of Ely’s Lady Chapel isn’t visual, at all. It is aural. The room has some of the most amazing acoustics of any sacred or secular space in which I have every been (or sung). The space is highly sought after for recordings. If you have a choir doing a Cathedral residency in the United Kingdom and Ely is nearby, you will want to sing there!

There are many other sights around the town to see. You will want to visit the home of Oliver Cromwell, the King’s School (one of the top private schools in England), and also wander down to the river to view the longboats as they pass. Ely truly is a perfect mixture of city convenience and country respite.

When you’re in London, don’t forget to get out of the city and explore all that England has to offer. You’ll find exciting history and sites around every turn. 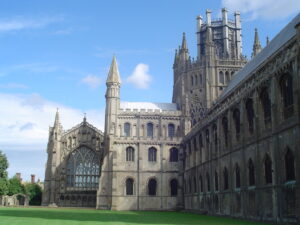