Tucked away in Southwest Scotland is the county of Ayr. It is the home of the Scottish poet Robert Burns, who once wrote about the area as: “Auld Ayr, wham ne-er a town surpasses, for honest men and bonnie lasses.” Follow us, today, as we visit the County of Ayrshire, with stops at Troon, Ayr, and Culzean Castle.

The first stop on our tour of Ayrshire is the town of Troon. The area is best known for its connection to the game of golf. Royal Troon Golf Club is a frequent host of the British Open. Most of the town hugs the rugged coastline. As with most places in Ayr, there are ties and legends associated with the Scottish National Bard, Robert Burns; Troon is no exception. Crosbie Church (a name that means it was located near a stone cross – or “Cross-by”) is first recorded as a church in 1229; the present structure dates from the 17th century. The legend states that the roof of the structure blew off the day Robert Burns was born and that the church was left as a ruin since that time.

Continuing South, we arrive in Ayr, the seat of the county. Although a beautiful town with a lot to see and do, most people coming to the area have a singular interest, Robert Burns. He was born in Alloway (located on the outskirts of Ayr), in 1759, and was an important part of the movement to cherish and revere the language and culture of Scotland.

Today, visitors can enjoy a tour of the cottage where Burns was born and a museum filled with personal artifacts of the poet, including many handwritten manuscripts. There is also a lovely Victorian monument and rose garden. You can even follow in the footsteps of Tam o’ Shanter to the Alloway Auld Kirk and over the Brig o’ Doon. (In Old Scotts a Brig is a bridge. So, the Brig o’ Doon is the bridge over the river Doon).

If you haven’t ever read any of Burns’ work, I would highly recommend it. His poems and verse are exceedingly entertaining (although you may want to read a translated version – since many use a good amount of Old Scotts mixed with English.) I feel he is one of those literary characters whose words are familiar to most people, but no one realizes the source. Here are a few examples:

The best-laid plans of mice and men often go awry

One last stop on our tour of Ayrshire has to be Culzean Castle, located about 15 miles down the cost from Ayr. The castle overlooks the Firth of Clyde and was designed by Robert Adam in 1777. It was the residence of David Kennedy, 10th Earl of Cassilis, and served as a country house. It is a wonderful place to visit, stroll through the gardens, and take a walk on the beautiful shoreline. One of the most interesting things about the castle’s history has a tie to the United States. When the Kennedy family donated the castle to the National Trust for Scotland, in 1945, they stipulated that the apartment located on the top-floor of the castle be given to General Dwight D. Eisenhower, in recognition of his role as Supreme Commander of the Allied Forces in Europe during World War II. General Eisenhower visited the castle for the first time in 1946 and returned there four times (once as President of the United States).

I hope you’ve enjoyed this romp through a lesser visited part of Scotland. When you are traveling from Scotland to or from Belfast, the Ayrshire area is host to a lovely and modern ferry terminal, with multiple sailings every day. Be sure to build some time into your itinerary to visit some of the sites of Ayrshire. I’m sure you’ll be glad you did!

Ev’n then a wise (I mind its power)
Shall strongly heave my breast;
That I for poor auld Scotland’s sake
Some useful plan, or book could make,
Or sing a sang at least.
(From Robert Burns “The Answer”, 1786) 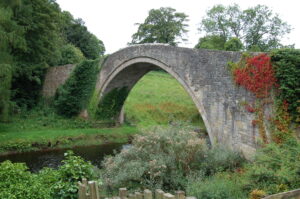