Not all pilgrimage travel needs to be international. Today, we’ll focus on how a visit to a site within the United States can be a great experience for your group and an easy introduction to group spiritual travel (especially for younger travelers). So, join us for a virtual pilgrimage of Washington, D.C., as we celebrate the 4th of July!

One of the great things about Faith Journeys is its relationship to Music Celebrations International (MCI). We share many resources with our sister company, including office space, tour services and a fabulous owner – John Wiscombe. Because of this relationship, we often combine our staff for special events. We come together with MCI staff each year to travel on “site inspections” to places around the world, so we can learn more about the places, food, hotels, and culture of that site. We also often pitch in to help each other for special events. And, that’s where today’s story begins.

A year ago, I was invited to travel with the MCI staff to help in the operations of the National 4th of July Parade, in Washington, DC. While I was assigned some duties in the days leading up to the parade and at the actual event, the rest of the time, I was able to tour the area and see some of the sites Christian pilgrims might like to visit.

Washington, D.C. is full of Christian historical sites; too many to mention in this blog. I would like to highlight a few sites that I feel would be meaningful stops for any group traveling to the area.

1.       The Museum of the Bible: One of the newest attractions in Washington, D.C. is the Museum of the Bible. It opened in 2017 and has been expanding its collections since that time. While there you can go on a Disney-like ride where you fly around the city to visit sites that have biblical connections. (I’ll have to say – I was very impressed by this and would highly recommend it). You can also walk through a reconstructed village from the time of Jesus or visit a variety of rotating special collection. (While I was there, they had an exhibit of the Wiedmann Bible. Here’s a link, if you’d like to learn more – https://www.museumofthebible.org/exhibits/the-wiedmann-bible). What most people come for is the extensive collection of bibles and bible-related articles. Where else can you view an original 9th century illuminated Gospel, followed by a Luther translation of the Gospel, a William Tyndell translation, and then pages from the Gutenberg Bible?

2.       Washington National Cathedral: Officially known as the Cathedral Church of Saint Peter and Saint Paul in the City and Diocese of Washington, this massive structure was built in the Neo-Gothic style and is the third largest church building in the United States. Construction began in 1907 (with the foundation stone being laid in the presence of President Theodore Roosevelt) and was completed in 1990 (as the final finial was placed, with President George H. W. Bush in attendance). The Cathedral continues to change and add stonework, stained glass, and other architectural and decorative features. One of the most viewed features is the “Space Window”, which was designed after photos taken on the Apollo 11 mission. The center of the window contains a sliver of moon rock, given by NASA to the church in 1974. The Cathedral has also been the site of many presidential funerals and special national services. It is a “must see” when visiting the Washington, D.C. area.

3.       Saint John Paul II National Shrine: Another newer addition to the list of Washington, D.C. religious sites, the shrine is located within walking distance of both the Basilica of the National Shrine of the Immaculate Conception and Catholic University. (I would recommend touring both Shrines and walking between them). Originally opened in 2001 as the Pope John Paul II Cultural Center, in 2014 it was renamed the Saint John Paul II National Shrine. It is filled with items and artifacts from the Saint’s life and offers an interesting look into his personal life and ministry. Aside from the museum setting, the building contains a beautiful church and chapel, both designed by Jesuit Father Marko Rupnik, and filled with stunning modern mosaics. I would recommend a visit to the shrine for any visitor to the area (whether Catholic or Protestant) to be inspired by the beauty of the mosaic art and the life of a holy man.

While there are many, many other religious sites to visit in the area, I hope these three will inspire you to consider Washington, D.C. as a domestic pilgrimage option for your group. And, like me, if you happen to be there on the Fourth of July, don’t miss the fireworks. They’re pretty spectacular!

Have a safe and happy Independence Day! 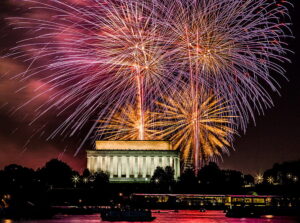