About an hour north of Tiberias sits the ancient site of Tel Dan. Near the headwaters of the Jordan River, Dan is uniquely lush and green in and today is a National Nature Preserve. Join us, today, as we visit Tel Dan and learn about its Old Testament history and connection.

Located on (what is today) the Northernmost part of Israel, and bordering Jordan, is a site known as Tel Dan. Its name comes from the hill (or tel) that is located on the site and from the Israelite Tribe of Dan. The book of Judges first mentions the site, calling it Laysha (or Laish). According to the biblical story, the area was conquered by the Tribe of Dan and a city was built over the burned ruins. The new city of Dan does get two other mentions in scripture (2 King and 2 Chronicles) with the story of Jeroboam and the idols of the golden calves.

Not much else is known about the site. In fact, there is a theory that it was left uninhabited for over 1000 years. We do know that in 1849, it was rediscovered and identified as being the site of the ancient city of Dan and a few years later, that was confirmed by other sources.

In the 1960’s, during the excavations and preparations to create a National Nature Preserve, several items were found that bring a large number of visitors each year. One of the most important is the original city gate, which was made of mud bricks and basalt blocks. It is believed to have been built around 1750 BC and is referred to as Abraham’s Gate, due to the biblical story that Abraham travelled to Dan to rescue his nephew Lot (Gen. 14:14). The gate has been reconstructed and is a popular stop for pilgrims visiting the area.

Several years later a heap of debris was removed which dated from 700 BC and a previously unknown gateway to the city was uncovered. This gate and path led to a stone paved courtyard with a low platform. The site had been enlarged and fortified throughout its history. The site’s raised square platform, with decorated stone sockets (possibly to hold canopy poles), may have very well been the king’s judgement seat and is now known as the Israelite Gate.

Aside from the historical value of visiting the excavation sites, the area around Tel Dan is beautiful and a great place to hike and explore. With it’s close proximity to Caesarea Philippi (Banias), the two can make for a great day trip from the Sea of Galilee. 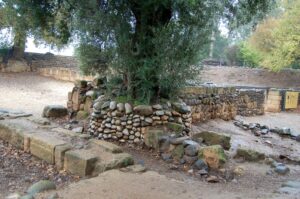