Did you know that Shakespeare once did a performance using only puns?

It was a play on words!

Of the notable names throughout history, William Shakespeare may be one of the best known. His plays and sonnets are some of the most memorable within the English language. If you look him up on Google, you’ll find 776 quotes that are still in use; all are attributed to him. Other than his writing, what do most people know about him? He was from Stratford-upon-Avon. That’s about it. So, join us today for a visit to Stratford to learn more about this quaint village and its most famous resident.

Located about 90 miles Northwest of London is the village of Stratford-upon-Avon. It seems quite a long name for such a small town! The name comes from the Latin word for street and the old English word “ford” – to cross a river. So, the name simply means there was a road where one could cross the river Avon or Stratford-upon-Avon (a name that’s been recognized since the year 1251.) Today, most people visit the area for one reason, to visit the site of William Shakespeare’s birth, his grave and sites associated with his life and work.

Any visit to the area is incomplete without a visit to the some of the buildings collectively known as the Shakespeare Trust. They include:

Shakespeare’s Birthplace – William Shakespeare was born in this house and grew up here with his parents and siblings. He also spent the first five years of his marriage living here with his wife Anne Hathaway.

Anne Hathaway’s Cottage – This twelve-roomed cottage was the childhood home of Anne Hathaway. It is an idyllic country home with a traditional thatched roof and is located about a mile outside of town.

Hall’s Croft – A building which was owned by William Shakespeare’s daughter, Susanna, and her husband Dr John Hall. It now contains a collection of 16th and 17th century paintings and furniture and an exhibition about Doctor Hall and the medical practices he may have employed.

Mary Arden’s Farm – A farmhouse belonging to Mary (Arden) Shakespeare, the mother of William Shakespeare. There are two houses on the site (one originally believed to be the home of Shakespeare’s mother, was fully restored before discovering it was the wrong house)! The site is about 3 miles from the village.

Shakespeare’s New Place – The adult family home of Shakespeare from 1597 until he died (on the site) in 1616; the house was demolished in 1759. A garden has been designed to commemorate the importance of the site and allow visitors to make their own personal connection with Shakespeare.

One other site that is definitely worth a visit is Holy Trinity Church. The original church on this site dates from 1210, with the majority of the current building dating from the mid 1400’s. It was the place of Shakespeare’s baptism, where he served as a “Lay Rector” (or lay reader) and where he was buried in 1616. His grave and a monument are located in the chancel of the church(not because of his notoriety as a writer, but for his position as a reader in the church). Although the church is a beautiful example of the architecture of the time, the walk from the center of Stratford along the River Avon and to the church, is by far more beautiful and a favorite of many, many visitors.

So, when you’re visiting England and want to take a look into the Elizabethan age, Stratford-upon-Avon is always a great stop-over. “To be, or not to be” there for more than a few hours is up to you! 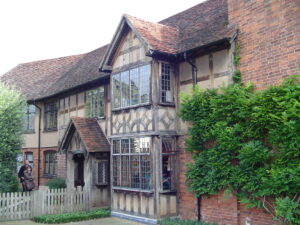