Many years ago I had the opportunity to travel to Spain for a site inspection (when a travel company representative visits an area with which (s)he is unfamiliar, for the purpose of setting up relationships with hotels, restaurants, concert venues, and sightseeing attractions). Although it sounds like a great thing to do, it is often filled with difficulty and challenge. I thought: what could possibly go wrong while traveling in a foreign county that I haven’t visited before? How difficult could it be to stay in a different hotel every night for over a week and fill my days with meetings and tours of sites? We’ll today, I’ll tell you about the first time I visited Madrid and what a horrible and wonderful experience it was!

As you might expect, everything started off without a hitch. I was off on an adventure that I had been looking forward to for a long time. I did have what one might call a grasp of Spanish, having taken a semester of “Conversational Spanish for Beginners” in college (several years before this trip); I hadn’t used any of what little I had learned in years. Still, I was armed with my pocket translator and ready for an adventure.

As the plane approached an airport somewhere on the East Coast of the U.S., the pilot made the announcement that “we would be landing soon.” Wait… that wasn’t what he said. Did he just say that we would be delayed due to weather? I guess my tight connection just got a little tighter! When we finally landed and got off the plane, I discovered that not only did I only have 10 minutes to get to my flight, but I was on the opposite end of the airport. So, off I ran, hustling as fast as I could until the gate was finally in site. I was going to make it!

It was then that I saw the gate agent close the door. When I arrived, breathless at the desk, I was flatly told that I had missed my flight! Thankfully, with some help from an agent, I was able to rebook on a flight to Madrid, flying through Frankfort, Germany. I did make that flight and was treated very well by the sympathetic flight crew. I made my transfer and was even able to speak some German to the agent in Frankfort (a language I speak much better than Spanish). Two hours later, I was finally in Madrid, however, my luggage was nowhere to be found. It had been separated from my when I missed my flight.

I won’t bore you with all the gory details of the first two days, yet, some highlights include:

No one at the car rental counter had a road map of Madrid, or was willing to write me directions to my hotel. (This was before the days of GPS on your smartphone). I got hopelessly lost while driving from the airport to the city. (Who would have thought that the road signs would be in Spanish! Also, when driving by yourself, on an unfamiliar road system, it’s hard to read the signs, comprehend them, and react in time – especially when they’re in an unfamiliar language

!) I finally saw the sign for a parking garage, parked, and used a payphone to call a taxi to take me to my hotel. (I abandoned my rental care right there and hailed taxis for the entire time I was in Madrid!)

But wait; there’s more. I scheduled meetings with the Bishop of Spain (the Anglican Primate) and a Roman Catholic Cardinal for the second day I was in Madrid. As of the morning of my meetings I still had not received my luggage. The only clothing I had was what I was wearing, and it was unseasonably hot! So I visited the shopping district of Madrid, armed with only a few words of Spanish to help me. “Equipaje – perdito. Quiero pantalones!” The shopkeepers found it hysterical and finally, after I’d found a department store and purchased an clothing suited for my meetings, I did too.

Once I settled into the situation, I had a wonderful time. I was able to stroll Plaza Mayor and Mercado San Miguel, visit the Royal Palace, and the Prado (which houses one of the most stunning art collections in the world – including a large number of El Greco and Goya). One of my favorite sites was La Almudena Cathedral, which only opened in the 1993, and was consecrated by Pope John Paul II. It is a visual feast of light and color.

I know I haven’t talk that much about Madrid, but I wanted to share that even people that work in the travel industry have bad travel days. To quote Ralph Waldo Emerson: “It’s the not the destination; it’s the journey.” If you find yourself facing challenges in your travels, or perhaps your travels have been cancelled due to unforeseen circumstances, it is the journey – the faith journey – that teaches us, that humbles us, and that often is what brings us to some of our most cherished and best memories of the experience. 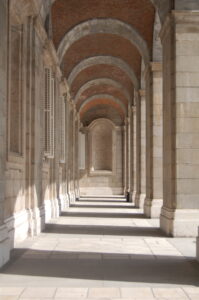