Today’s stop on our virtual pilgrimage brings us back to England. Holy Island, or the Isle of Lindisfarne, is a special place located in the very North of England. It has a fascinating history that includes Celtic Christianity, early English saints, and viking raiders.

The Isle of Lindisfarne is located a little over a mile from the English shoreline, into the North Sea, and about 70 miles South of Edinburgh. Geographically, it is unique to the English coastline, as it’s a tidal island. That means that twice a day (as the waters ebb and flow) it is accessible by land. Yes. You can actually walk to the island, although, I would strongly suggest riding there in a bus or car. It is important to watch the tidal timetable on the day you visit. When the tide does come back in, it comes in quickly.

Because of the location, for the majority of the day, the Isle of Lindisfarne, is, in fact, an island. One must stay there until the next ebbing of the tide. I’ve had the chance to visit Holy Island several times and find there’s something very powerful about driving across dry land, getting settled in, and looking back to see that the road is no longer there! I have felt it a test of faith that the waters will recede and I will once again be able to return home.

The history of Holy Island is one that many people don’t realize they know. If you’ve ever watched a movie or TV show about vikings you know that they discovered a passage to the West and sailed to a new land. They raided and pillaged a monastery they found, and murdered nearly every monk residing there. They then went on to the conquer most of England. The first place they landed, and the monastery they plundered and destroyed, was the Lindisfarne Priory!

Before the viking conquest and after, the priory on Holy Island was a site of deep faith and learning. Some of the more famous residents included St. Cuthbert and the Venerable Bede. The monastic brothers who lived there were also know for their highly trained scribes. They created the Lindisfarne Gospels, an illuminated manuscript gospel book that dates from the early 8th century. (Although the original is housed at the British Library in London, digital copies of the book are on display on the island.)

While visiting the island, be sure to see the the ruins of the original priory, the Parish Church of St. Mary the Virgin, and the newly restored castle. Also, if you’re there at the right time of year, the wild strawberries on the island are, quite possibly, the best I have ever eaten! And, if you’re a fan of Mead (wine made from honey), the product produced on the Island is considered to be some of the best in the world (and has been since the time of the vikings).

When you visit, be sure to take some time to wander around the windswept landscape and imagine what it would have been like to have been some of the first Christians in that part of the world. Have the faith that the road you crossed to get to this beautiful and holy place will once again appear, and bring you safely home to a new day. 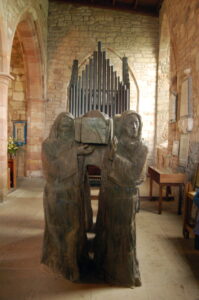