When most people think about traveling the United Kingdom, their focus is on England. I’m sure some (including myself) might choose Scotland or Northern Ireland. The fourth country of the “UK” is often forgotten when planning an adventure to Great Britain. Today, we’ll cross the border into Wales and visit it’s capital city, Cardiff. So, Croeso i Cymru!

Located to the West of England and bordered by the Irish Sea, Wales finds itself in a unique place in British history. In fact, Wales is considered a “modern Celtic nation.” Their ancient culture, traditions, and language has been retained more than anywhere else in the British Isles. With the resurgence of the speaking and study Welsh language in the 1960’s, a national identity has re-established itself taken hold across the country.

One of the more entertaining aspects of this dual language nation is the inclusion of both English and Welsh on road signs. One notable mention is the village of Llanfair­pwllgwyngyll­gogery­chwyrn­drobwll­llan­tysilio­gogo­goch (yes, that’s all one word), located on the Island of Angelsey. The Anglicised version of the village is Llanfair PG. Some common signs you may see include: Araf (Slow), Ysgod (School) and Croeso i Cymru (seen above– which means Welcome to Wales).

Since there are many resources that include the history and development of Wales, I’ll leave it up to you to learn and study. Today, I want to focus on two sites that are well worth a visit while in Cardiff.

Our first stop is Cardiff Castle:

Located in the center of the original settlement of Cardiff, the site has been home to some sort of fortification since the Romans built a fort there in the 3rd century. Different castles and fortresses have been constructed there since that time, with the latest work being done as late as 1920. Today, visitors can tour the Norman Keep, the original Roman Wall, a working trebuchet, and the Victorian splendor of the house (including the Arab room, banqueting hall, small dining room, and library).

Next, we move on to Llandaff Cathedral:

Started and completed in the 12th century, the Cathedral has sustained great damage over the years, including rebellions, the English Civil War, storms, and bombing during WWII. It is one of two Cathedrals in Cardiff (the other being the Roman Catholic Cardiff Metropolitan Cathedral). There are several notable graves located within the Cathedral, including Dubricius (a 6th-century saint who evangelised much of South-East Wales and Teilo, 6th-century clergyman, church founder and saint).

One other item of note is the Cathedral organ. The previous instrument had been rebuilt after it was damaged in WWII and later sustained lightning damage. So, the instrument continued, as best it could, until the autumn of 2008, when installation of a new organ began. Although not finished, it was first played at the Easter Vigil service on April 3, 2010. The remaining stops were added in 2013, making it the first entirely new organ built for British cathedral since the Coventry Cathedral organ in the 1960s.

I hope you’ve enjoyed this quick tour of Cardiff. When you’re traveling West of England, consider making the short trip over the River Severn into Wales to experience a different view of Great Britton. I’m sure you’ll enjoy it and you might even pick up some Welsh, in the process.

“Eang yw’r byd i bawb.” The world is wide to everyone! 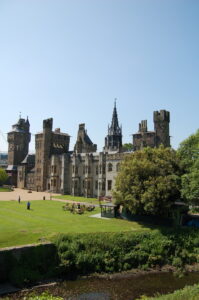