During my time living in the United Kingdom and subsequent visits, one of my favorite sites to visit was Canterbury. Not only does the town have a great literary tie to history and pilgrimage (through Chaucer’s Canterbury Tales), but it has one of the oldest and most stunning worship spaces in the world.

Canterbury Cathedral was founded in 597, rebuilt in the 11th century, expanded in the 12th century, and once again re-built in the 14th century. The structure we see today mostly dates from that time. The soaring beauty of the building is stunning tribute to the stonemasons and builders that complete such a structure hundreds of years before electricity and power tools. But, it is also a site of solace and prayerfulness.

One of the more striking features of the cathedral is the site of a former shrine to Thomas Becket. (In case you don’t know the story, Tomas Becket – and it is a pretty fascinating story – here’s a link to a brief biography:
www.canterbury-archaeology.org.uk/becket-biog/4590809613)

This shrine which stood between 1220 and 1538, was loaded with gold, silver and jewels that had been brought to Canterbury by pilgrims visiting the shrine, which was thought to have healing powers. As the pilgrims would gather around the shrine to pray, a priest of the Cathedral would pull a rope that opened a wooden canopy which held the treasures. After the dissolution of the monasteries by King Henry VIII, the shrine was removed. Today, in the site where the shrine once stood, you will see a single burning candle and depressions in the stone from where untold numbers of pilgrims knelt in prayer before the shrine.

Other items of notes are the site marking the martyrdom of Thomas Becket, the Crypt, and the Quire (where the choir stands to sing). Other area sites that are worth a visit are St. Augustine’s Abbey Ruins, and the Cathedral Cloister. And, if given the opportunity, attending a service of Evensong in the Cathedral is not to be missed. You will get to hear a order of worship that is nearly unchanged and that has been offered for nearly five hundred years. 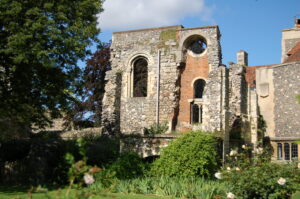 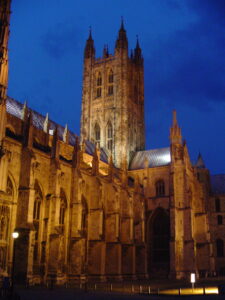 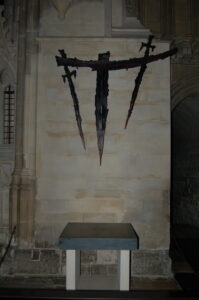 Canterbury is truly one of “the great Cathedrals” of the world and is a must see for anyone visiting London or the South of England. If you have any questions about this site or you would like to share your own photos and stories about your Canterbury, please visit our Facebook page and post them there. 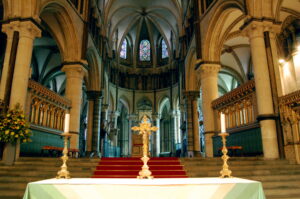