Day 1: Departure from the USA  Our journey begins with an overnight flight, with full meal/beverage service and in-flight entertainment, to Dublin, Ireland. 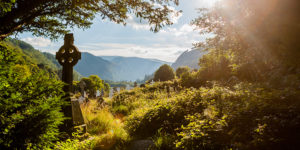